Member in the Spotlight: Maureen Thomas 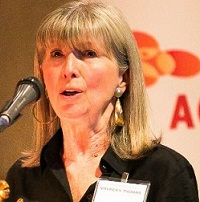 Awarded an ACTRA Lifetime Membership in 2016

What has been your favorite role?

I have had several exciting action roles: I shot Alexander Skaarsgard with a bolt-action 303, I was killed by a ouija board to the throat (much blood), I hanged my neighbour with a stair lift, and axed a head (of cabbage) in half but, unexcitingly, my favourite role was as the grandma in Deck the Halls (the Gabriel Carteris/Steve Bacic one, not the deVito/Broderick).

What do you do when you are not performing?

Performing my favourite role, grandma. My husband, David and I moved back to Calgary from the West Coast for our roles in this special Lifetime series starring Lily and Isla.

In the film/TV/theatre industry we deal with completely unpredictable availability, so it’s hard to commit to regular attendance and work with charitable organizations but there are a few that I support with my contributions – one of which I especially love because it’s linked to our industry: Farm Radio International. Years ago, the noon radio news here always included crop information, and as the daughter and granddaughter of farmers, even though I’d never actually been on a farm I kind of liked listening to them. Farm Radio International was the brain child of a Canadian farm radio broadcaster who was running a radio workshop in Africa in the 70’s. His initiative resulted in establishing a network of radio programs that specifically helps small-scale farmers with information, advice, current conditions, communications and more, to over 700 radio stations in countries across Africa.

Some of the ones I’ve already worked with. I have a theatre background and I love being part of the group – actors, directors, crew – so my favourite films have been the ones I had the most days on and where I really felt part of the gang. And those are directors I’d love to work with again, I admire them all: Suzanne Bier, Omar Madha and George Mendeluk.

What is your favorite movie and/or TV show?

Wow, in the year of covid and so much Netflix that’s a hard one but… Borgen, Call My Agent, The Kominsky Method and, even though it’s really old now, my all-time favourite and I wish it was real life: The West Wing. Great ensemble acting, terrific writing, and groundbreaking directing. I’ve worked with a few of the actors from that show and it’s been an honour.

As a Performer, what is one thing you wish you would have known sooner?

It took me awhile to learn that creative spontaneity comes out of really, really, really, really knowing your lines and your role. Things don’t get less fresh, they get more – more free, more responsive, more creative and more honest. I learned that those moments that sometimes happen weeks after you’ve finished shooting, when you’re replaying the role yet again in your head and you come up with something new and you think “shoot, that’s how I should have done it”, that you want those ‘three weeks after’ moments to actually happen when you can use them.

© 2021 ACTRA. All rights are reserved and contents, in whole or in part may not be reprinted without permission. The points of view expressed do not necessarily represent those of ACTRA.